“Finding your voice and sharing it to help your fellow human is one message that applies across all facets of leadership.” — Lt. Colonel Scott Mann, retired Green Beret.

This picture of Rebecca and me on the Golden Gate Bridge in San Francisco popped up on my Facebook memories page today. It was a reminder of a lovely day and the leap of faith I took when I moved back there four years ago. Rebecca is an amazing and compassionate nurse for children with cancer and we both have a long history in San Francisco. She was visiting the Bay area the day I arrived. 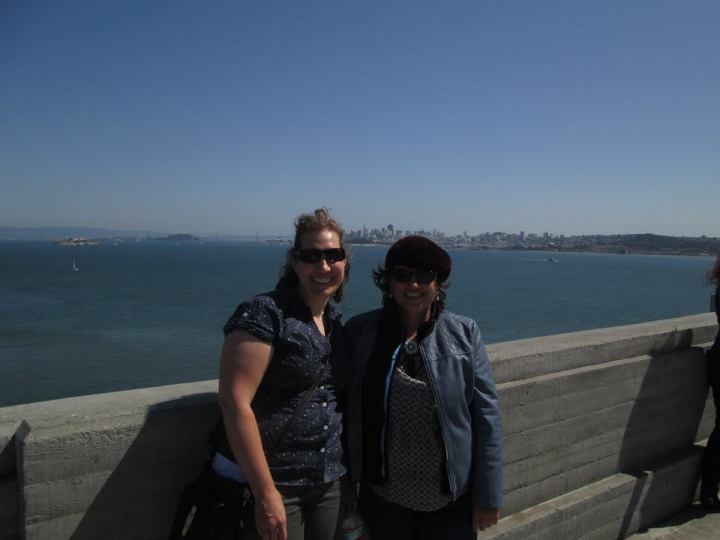 Before that day I had been living at an elevation of 6,035 ft., in a city in Colorado at the eastern foot of the Rocky Mountains, for five years. Colorado Springs is host to the glacier-carved Pikes Peak, a landmark in Pike National Forest with hiking trails and a cog railway leading to its 14,114-ft. summit. I spent many a day in the city’s Garden of the Gods which features iconic red-sandstone formations and amazing mountain views.

My mum came to visit a few times. Once on alighting from the plane from Denver to Colorado Springs, I noticed her complexion was a bit green. I asked if she was okay. She said, “that flight might have be the shortest I’ve taken but it was the roughest.” I was told later that that flight path might be the most turbulent in the world.

I’ve mixed memories of Colorado Springs. The island girl in me did not like being landlocked. But the geography of the Springs is incredible. I prefer coastal and international cities but I am forever grateful to have worked for Compassion International and I met some amazing families. I miss the fluffy, light snow which can fall right up to late May, the constant sunshine, and the mild climate.

Northern California is a favourite place for me. It’s open, creative, ethnically diverse and entrepreneurial. There’s plenty of jobs too. It took me two weeks, without trying, to land two jobs pm ADT time I was there. I’m grateful I got to experience Bayside Church and the Jesus culture movement in Sacramento. I even applied for the Communications Director job within a month of arriving.

Pastor Ray Johnson and Curt Harlow showed me a beautiful way of presenting the gospel. Although fairly inaccessible they appeared to be truly gracious, crestive and generous leaders.

Last week-end the circle of life brought me to paths in Craigavon, Northern Ireland. I went to visit a very special circle of girlfriends. That’s us in the featured picture. We share a 30 + year history. We’ve traveled many paths, walked over many bridges and driven around many roundabouts together in Craigavon. Some of our more bold antics and what we were subjected too in Craigavon won’t be shared here yet.

Our ordinary peace-loving families were lead to Craigavon over 30 years ago when families were beginning to be subjected to a vicious campaign of hatred and murder. Subjected to the bomb and the bullet, from paramilitaries on both sides of the sectarian divide, we were either asked or forced to move to this planned settlement in northern County Armagh. The planned town construction began in 1965. It was named after Northern Ireland’s first Prime Minister: James Craig, 1st Viscount Craigavon.

I moved to Craigavon from east Belfast when I was just two years old. The best thing about being transplanted there with other families fleeing ethnic conflict from all over the province was it became the most religiously mixed part of Northern Ireland and that is the main reason why I’ve been non-sectarian or religiously color blind all my life.