“The Belfast/Good Friday Agreement is a precious gift and it is incumbent on the politicians of today to make the most of it.”
–Bill Clinton.

I pushed the Millar doorbell and a mighty bee buzzed around my head in a slow and haphazard fashion. I was surprised by its size. It was a sign of Spring. The bees are coming. Indoors I enjoyed one of Rosemary’s mashed potato and Guinness infused steak meals. Ollie the dog sat directly in front of me, after dinner; toe to toe. He was very focused on what I was saying and seemed determined to meet me. Then out of nowhere he lifted his little paw in the air for a dog high five!!

Roy, Rosemary and I drove to The Falls area of west Belfast. The Shankill and The Falls are two of the most famous roads in Belfast. They’re close in proximity and share a history of political unrest during The Troubles. 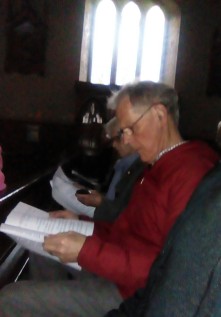 Clonard Monastery were hosting “Redemption: A Celtic Passion.” It was a celebration of the passion and triumph of Jesus in songs and music from both Catholic and Protestant cultures and traditions. 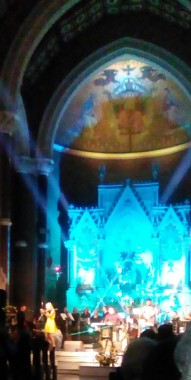 Redemption (pronounced reed DEMP shun) is the act of buying something back or paying a price or ransom to return something to your possession. Redemption is the English translation of the Greek word agorazo, meaning “to purchase in the marketplace.” In ancient times, it often referred to the act of buying a slave. It carried the meaning of freeing someone from chains, prison, or slavery. I recalled how Rosemary had recently helped me get an old bicycle back. It was a precious gift from my dad purchased in Banbridge, a few years before he died.

Clonard monastery has stood in the heart of west Belfast for more than a century and like many old buildings, it fell victim to the ravages of time. It’s just had a costly monasterial makeover to preserve the fabric of the building. Some of its Redemptorist priests have played important mediation roles in the Northern Ireland peace process. Father Alec Reid initiated secret talks between Sinn Fein’s Gerry Adams and the former SDLP leader John Hume and was described as being “absolutely critical” to the peace process. He started out with these two questions to Adams: “What can you do to stop the IRA? Can anything be done to stop the IRA?”

Interestingly last week Bill Clinton, Tony Blair and the remaining living architects of the treaty that ended conflict in Northern Ireland 20 years ago returned to Belfast to warn that continued peace could not be taken for granted. The Belfast/Good Friday Agreement signed by the British and Irish governments and political parties in Northern Ireland on 10 April 1998 contained proposals for a power sharing executive in Northern Ireland, prisoner releases, the decommissioning of paramilitary weapons, police reform and human rights initiatives. This booklet entitled ‘The Agreement – It’s your Decision” set out the terms of the agreement and copies were sent to every home in Northern Ireland and the Republic of Ireland in advance of the referendum held on 22 May 1998.

It marked real progress but the early release of prisoners, decommissioning and police reform involved difficult negotiations . The Omagh bomb proved that the violence was not over and controversy later emerged over the RUC’s handling of information and evidence both before and after the bombing.

Last week The Times reported that Mr. Clinton called the Good Friday agreement “a precious gift” and warned it was incumbent on the politicians of today to ‘make the most of it.” He shared an hour-long panel discussion with Mr. Blair and Bertie Ahern, the Irish prime minister at the time of the deal, along with other key players who helped to broker the agreement. Mr. Blair warned that Brexit could easily challenge the basis of the agreement, adding that it would require “real focus and hard work” to avoid a hard border that would be a “disaster for the relationship between the republic and the UK.” Also present in Whitla Hall were George Mitchell, the ex-US envoy to Northern Ireland, Jonathan Powell, the former Downing Street chief of staff, Gerry Adams, the former Sinn Fein president, and Lord Trimble, the former Ulster Unionist leader.

Meanwhile a Labour MP has called the agreement a “shibboleth”.  It means a custom, principle, or belief distinguishing a particular class or group of people, especially a long-standing one regarded as outmoded or no longer important.

Here’s a few questions to ponder, please feel free to share your thoughts. Sharing is caring;

1.  Are you interested in coming to Northern Ireland to study The Troubles and the peace process?

2.  How do you oppose the use of violence by anyone in your community?

3.  What does it look like to build trust in relationships after the use of violence?

4.  Are you making an effort to get to know your neighbors?

5. Do you have personal memories, both positive and negative of The Troubles ?

Do you need support?

The Victims and Survivors Service deliver funding and support to victims and survivors on behalf of the Executive Office.